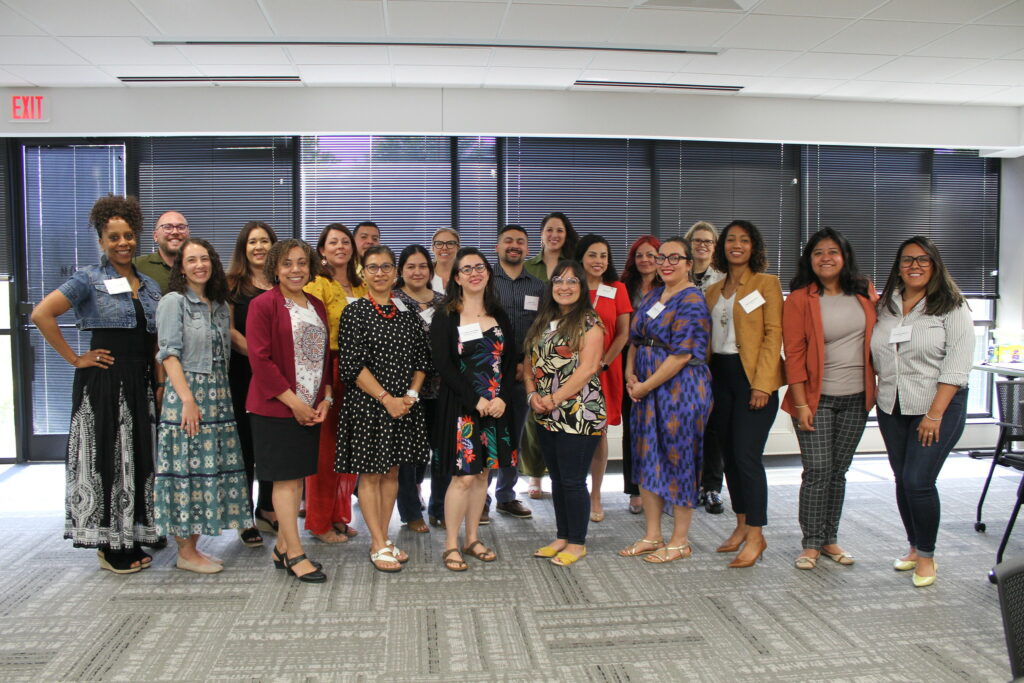 On June 16, 20+ North Carolina Latinx educators convened for the event Caminos: Building Pathways with Latinx Educators. The convening provided educators with an opportunity to share their journeys to careers in education, obstacles they’ve experienced and successful strategies to minimizing barriers.

When Jusmar Maness arrived at a school on her first day as its principal, students questioned if she actually was the principal. The school was 93% Latinx, and they couldn’t believe a principal could look like them.

“We need to show our students that it is a pathway—that it is a possibility. That it is a way that they can get other opportunities,” said Maness, deputy chief of schools for Guilford County Schools, at the Caminos: Building Pathways with Latinx Educators conference hosted by the Friday Institute for Educational Innovation on June 16. “But if we don’t have people who look like them that can talk to them about it, it’s not going to change.”

An extension of the Friday Institute’s NC Conference for Educational Equity, Caminos—which means road or path in Spanish—was a convening of 20+ North Carolina Latinx educators that provided an opportunity to share their journeys to careers in education, obstacles they’ve experienced and successful strategies to minimizing barriers, as well as to generate ideas for improving representation of Latinx in education. The conference was organized by Patricia Hilliard, research scholar at the Friday Institute; Jason Lynch, assistant professor of higher education in the Reich College of Education at Appalachian State University; and Mayra Szeto, teacher support coordinator in the Office of Performance Management with the Wake County Public School System.

“The amount of talent North Carolina has within its Latinx educator population is extensive; however, there are many pockets of isolation,” Szeto said. “This convening carves out a safe space for educators to connect and be in the company of others who share similar stories, explore solutions for breaking barriers within education, pave additional caminos, find roads less traveled and open the door for the next generation.”

“For the longest time, I have been the only administrator that has been Latina,” said Ileana Herrera, assistant principal at Carrboro High School. “I have stayed not so much because of me but because there wasn’t anyone else. If the [students] don’t see themselves in someone else in the school, then they will have no hope. Someone has to be there to give them hope.”

Keynote speaker Carlos Ramirez takes a break during his talk to connect educators with different levels of experience.

During his keynote, Carlos Ramirez, a member of the Developing a Representative and Inclusive Vision for Education (DRIVE) task force, encouraged educators to continue on despite the difficulties they face.

“Do not accept this reality,” said Ramirez. “It’s just one window of our house. And if you just look through that one window, you don’t see it all…You are fighting with people who don’t believe in you, who don’t believe in what you’re doing, don’t believe that brown and Black kids can be successful. They may be your boss. So smile, shake their hand and when the door closes, you do the work that is most important.”

The panel discussion later in the day echoed Ramirez’s sentiments, emphasizing the power of representation and providing suggestions for increasing that representation, including having leadership buy-in and putting policies in place to retain and recruit Latinx educators.

“When you experience a teacher who shares your ethnic identity, they hold students to higher expectations and standards,” said Hilliard, who moderated the discussion. “Students are more likely to have their academic and SEL needs met, and also research has shown that if you have at least one teacher who shares your identity, you’re more likely to attend higher education.”

According to Maness, Guilford County Schools Superintendent Sharon Contreras has modeled representation in her leadership team and her district by increasing Latinx administrators in her district from 1 to 17 and recruiting Latinx students from colleges of education for employment by offering incentives such as paying student loans.

“It takes that level of leadership to really understand what representation matters to then spread that to our schools and classrooms,” said Maness during the panel. “It’s about being intentional, strategic, but also having that courageous leadership that says we have to do this, and we have to expand this in districts across North Carolina or we keep ourselves in the same space.” 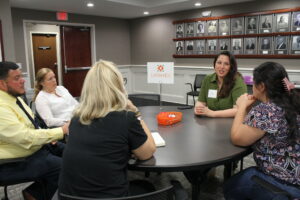 Elaine Townsend-Utin, executive director of LatinxEd, speaks with Latinx educators about her organization during the coalition to build stronger pathways to education.

After the panel, the participants had roundtable discussions around what key stakeholders, including North Carolina school administrators and district leaders, colleges and universities, and policymakers and legislators, can do to help increase Latinx representation in the education profession. Some suggestions included inclusive interviewing, partnerships between K-12 and higher education, future teacher and teacher fellow programs specifically for Latinx educators and Latinx networking groups.

The day concluded with a reflection from Elaine Townsend-Utin, executive director of LatinxEd, who shared follow-up opportunities for connection and action, including joining the Hispanic/Latino Action Coalition and participating in the Latinx Education Summit.

For both event organizers and participants, the work and connections will extend beyond the convening.

“It was empowering to be in a space of individuals who share the common goal of continuing representation for Latinos, specifically for education, but for whatever career, you know, just advancing the community,” said America Moreno, a high school ESL success advocate at Henderson County Public Schools. “It’s just really cool to see we’re not alone doing it. Sometimes it can be overwhelming, but estamos juntos en hacerlo (we’re doing it together).”