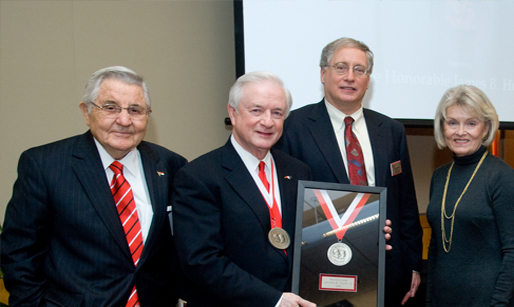 NC State University’s College of Education and the Friday Institute for Educational Innovation honored Former Governor James B. Hunt at its annual Friday Medal Presentation on November 19. An advocate for education reform throughout his career, Hunt addressed educational policy for the new national administration.

“I am hopeful because Barack Obama has put such a priority on education. He talked about it at every campaign stop and made 12 major speeches just about education,” Hunt said. “If we put the right emphasis on education, we will have the resources to do all the other things we need to do.”

Gov. Hunt spoke about the educational needs of the country and what the priorities are for the Obama administration. The speech centered on the serious problems facing education in the 21st century including: early childhood education, quality teaching, reforming education and accountability and recruiting an army of new teachers.

“President-elect Obama recognizes the seriousness of our problems in education including dropout rates,” said Hunt. “Obama has said, ‘The achievement gap is morally unacceptable and economically untenable’ and I agree. We must do better,” Hunt added.

Hunt went on to outline other challenges and priorities such as overhauling the approach to teaching and school leadership and teacher pay.

“The goals of No Child Left Behind: high standards, greater accountability and disaggregation of data are good, but Obama believes we need to fix that law to focus on teacher quality, better assessments and more funding,” according to Hunt. “Making college affordable for all is another priority for Obama.”

Friday said he and Hunt have had a long friendship. “It’s been a partnership, a very rich, very rewarding relationship for me,” Bill Friday said on his 50-year friendship with Hunt, dating back to Hunt’s two terms as student body president at N.C. State University.

Hunt was mentioned earlier this month as a possible candidate for U.S. secretary of education, but he reaffirmed that he isn’t seeking that cabinet seat. Hunt says he has agreed to advise the President and the new Secretary of Education but would prefer to remain in North Carolina and not move to Washington.

The former governor is a national education expert and while governor he was the architect of North Carolina’s Smart Start early childhood program. He served on the federal Commission on the Future of Higher Education assembled by Secretary of Education Margaret Spellings, and is chairman of the board and a founder of the National Center for Public Policy and Higher Education, a California-based think tank. He also serves as board chairman of the James B. Hunt Jr. Institute for Educational Leadership and Policy.

The Friday Medal was presented by the College of Education and Friday Institute for Educational Innovation to Hunt for his lifetime commitment to improving education across the country. The medal is awarded annually to a leader with significant, distinguished and enduring contributions in education who embodies the mission and spirit of the William & Ida Friday Institute for Educational Innovation. The ceremony is the highlight of the American Education Week in the College of Education.