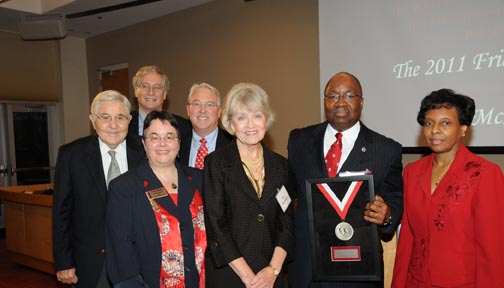 McNeal has over 30 years of educational experience in Wake County. As Wake County superintendent, McNeal focused all of the school system’s energies on meeting the goal of having 95 percent of third- and eighth-grade students at or above grade level. He helped narrow the achievement gap while continuing to challenge Wake County’s most advanced students. His efforts led to his being named the 2004 National Superintendent of the Year, the only superintendent from North Carolina to ever achieve that title. He later served as Executive Director of the North Carolina Association of School Administrators, working to strengthen school and district leadership throughout the State.

“Tonight we honor, Bill McNeal, who has dedicated his career and life’s passion to advancing education in North Carolina,” said NC State Chancellor Randy Woodson. “From teacher to superintendent to an educational leader on several boards, we are privileged that he shares his experience and knowledge to better our community.”

McNeal also played an integral role in North Carolina’s Race to the Top proposal. He was one of five, including Governor Perdue, to defend successfully the grant in Washington, DC. And he continues to serve NC State by serving on both the College of Education Advisory Board and the National Advisory Board for the Friday Institute.

“It’s been a pleasure to work with Bill on a number of groups, including the one that brought the Race to the Top funding to North Carolina” said Glenn Kleiman, executive director of the Friday Institute. “Bill makes every group work together more successfully. He is able to convey a deep understanding of any issue from multiple perspectives, and help a group move forward productively. One of the many reasons we selected Bill for this award is that, like Mr. Friday, we value not just what he has accomplished but how he has gone about things, always being constructive and working with deep respect for others and others’ ideas.”

McNeal addressed the group speaking about progress made, and the challenges facing, K-12 education. See video below.