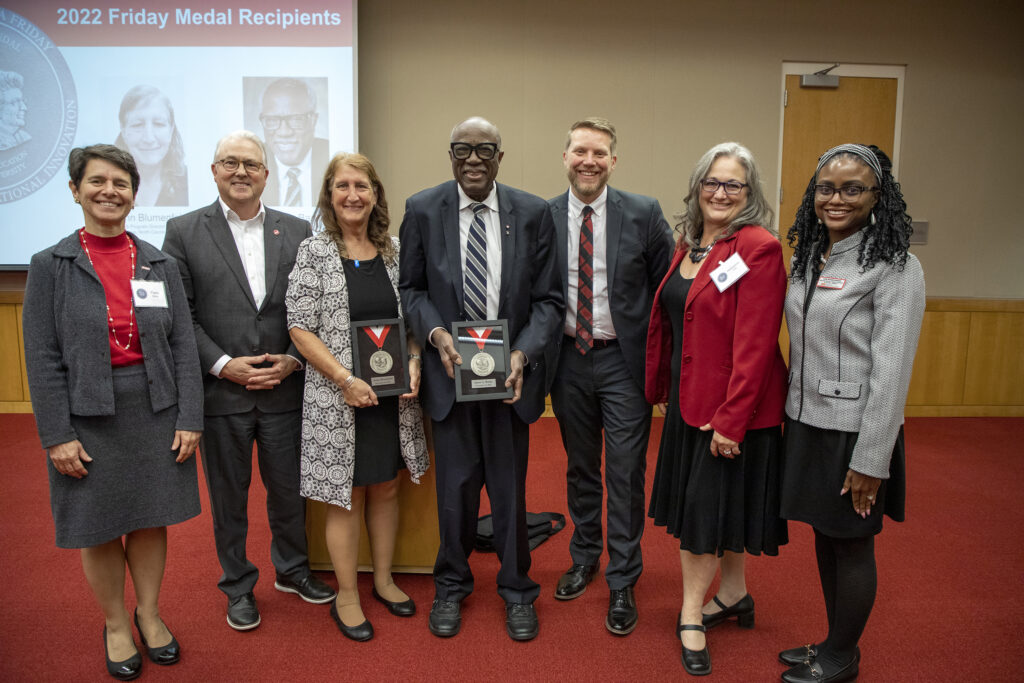 Serving as a bridge between education research and education practice in schools is key to the Friday Institute for Educational Innovation’s mission of advancing K-12 education. On Monday, Nov. 14, the Friday Institute held a ceremony at its home on NC State’s Centennial Campus for the first time in four years to honor both an education researcher and practitioner who were selected to receive its Friday Medal. This award honors significant, distinguished and enduring contributions to education and beyond through advocating innovation, advancing education and imparting inspiration. James A. Banks, the Kerry and Linda Killinger Endowed Chair in Diversity Studies Emeritus at the University of Washington College of Education and founding director of the Banks Center for Educational Justice, and Joann Blumenfeld, founder and program director for Catalyst at The Science House, were this year’s recipients.

“The importance of this partnership between researchers and practitioners is reflected in the selection of this year’s Friday Medal recipients–two inspirational educators who have made a significant impact in advancing education through their research and through their teaching,” said Shaun Kellogg, interim executive director of the Friday Institute, as he gave his welcome remarks during the ceremony.

The Friday Medal is given annually to selected individuals who embody the mission and spirit of the Friday Institute. It is named after Bill and Ida Friday, who were passionate advocates and leaders in education for more than 50 years. Banks and Blumenfeld are the 16th and 17th recipients to receive this honor.

During her time in K-12 special education, middle and high school science, and middle school language arts, Blumenfeld saw firsthand the benefits of high-quality STEM education and discovered that the best way to teach was through hands-on learning. Unfortunately she had a budget of $1.50 per student per year to accomplish this learning and had to supplement that budget by writing and applying for grants to keep her classroom projects funded.

Then in 2012, after attending a professional development led by Jason Painter, director of The Science House, Blumenfeld emailed Painter to see if he was interested in creating a STEM program for her special education students who she said were often overlooked as innovators and leaders.

“Joann was determined to ‘equip differently thinking people to make a better world,’ and I love that,” said Painter during the ceremony. “But it wasn’t just about the students…it was about changing the mindsets of school leaders, university administrators, STEM business leaders and society as a whole to understand that students with disabilities are just as capable of academic achievement in STEM fields as any other student given the right opportunities and the right accommodations. She believed this with her whole heart.”

Painter believed in her mission too, bringing Blumenfeld’s program to The Science House in 2016. Since then, her students have accomplished amazing things. Catalyst has won four national awards, including the Lemelson-MIT InvenTeam Award, where they were the only team comprised entirely of students with disabilities, and has received a letter of commendation from former President Barack Obama. One hundred percent of Catalyst graduates have pursued post-secondary STEM degrees and many of them have received scholarships.

Blumenfeld works to ensure that her participants become part of the STEM workforce, fighting against the statistic that 80% of people with disabilities between the ages of 24 and 64 are unemployed, according to the U.S. Department of Labor.

“Many of the most famous scientists from history and today have disabilities,” said Blumenfeld. “We need to create and support more innovative programs to create opportunities for the future generation. I always say my students with disabilities make great engineers and scientists. They innovate daily and problem solve to do things their peers do. They have learned great perseverance and can think outside the box and add great perspectives. I also tell my kids a disability in one environment is a plus in another.”

Blumenfeld credited the award to her students, who she said have demonstrated that innovative programs like Catalyst can show that students with disabilities can be successful in STEM and help create an inclusive, diverse and innovative workforce.

Known worldwide as the “father of multicultural education” for his pioneering work in the field, Banks has influenced undergraduate students, international scholars, K-12 educators, schools, colleges and universities throughout the world with his research. He also paved the way for his university as the first Black professor hired by the University of Washington’s College of Education in 1969, serving on its faculty for 50 years before retiring in 2019. Banks’ research on how educational institutions can improve race and ethnic relations has influenced the fields of social justice education, social studies education, multicultural education and many other related fields.

“Many of us would not be where we are today if it were not for him, nor would entire fields of study have grown as significant in influence and reputation,” said Sonia Nieto, professor emerita of language, literacy and culture at the University of Massachusetts, Amherst, who paid tribute to Banks during the ceremony. “To say that Jim is a force of nature is an understatement. He has more energy, creativity and drive than almost anyone I know, but it’s generosity, his collegial spirit and his dedication to our youth and their future that are the hallmarks of his entire career.”

Banks has written or edited more than 20 books and 100 articles in the fields of social studies and multicultural education. His books include An Introduction to Multicultural Education and Diversity, Transformative Knowledge, and Civic Education: Selected Essays. He was the inaugural editor of the Multicultural Education Series of books published by Teachers College Press, which has published more than 60 titles in the series. Banks is also an author for the elementary grades of the McGraw-Hill Impact Social Studies program.

“Mary McLeod Bethune, the great and inspiring African American educator said that ‘Without faith, nothing is possible. With it, nothing is impossible.’ Therefore, I continue to work in this field so hard because I have faith that leadership in action can make all the difference in the world,” said Banks when he accepted his award.

Also during the ceremony, Kellogg announced this year’s Friday Institute Graduate Student Fellow winners, Kathleen (Kat) Bordewieck and David Stokes, who will receive $2,000 to support their dissertation research. Bordewieck is a doctoral student in science education in the College of Education, and Stokes is a doctoral candidate in the Learning and Teaching in STEM mathematics and statistics education concentration in the College of Education.

This year’s Friday Institute Graduate Student Fellows are researching topics that focus on increasing equity in STEM education and educating students and families about wildlife science.

About the Friday Institute