When a robot faces an obstacle, it has multiple options to bypass it. It can turn 180 degrees, move forward and then turn right or left. It can also move backward and then turn right or left to pass the obstacle. There’s not always just one correct solution to a problem, and you can approach the same issue from different angles and perspectives. When Mike Babb and Hamid Sanei taught a three-week robotics program as part of Warren County Schools’ (WCS) Summer Bridge Acceleration Camp, they quickly realized that the curriculum they had planned did not match the students’ ability to learn quickly, despite the fact that most had never seen code before. They had to back up and then go left by expanding the curriculum they had already planned in order to match their students’ learning levels.

“We should not underestimate students’ passions and capabilities in learning STEM,” said Sanei, a graduate research assistant on the Hub for Innovation and Research in Statistics Education (HI-RiSE) team at the Friday Institute for Educational Innovation and a graduate student in the Department of Science, Technology, Engineering and Mathematics (STEM) Education in the NC State College of Education. “STEM integration through computational thinking, which was robotics in our case, should not be considered for a specific group of students (e.g., talented, gifted, etc.). Based on our story, it works for all, if the educators spend time, plan appropriately, and put some love into their work.” 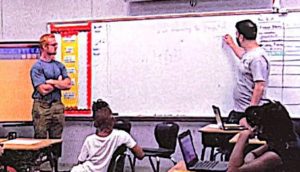 Babb and Sanei worked with fourth and fifth graders at Mariam Boyd Elementary four days a week for three weeks, developing a close bond with the students and teachers.

The WCS Summer Bridge Acceleration Camp for elementary students ran July 11-29 at Mariam Boyd Elementary in Warrenton, North Carolina. The program addressed learning loss and provided enrichment opportunities for students. The robotics classes were split by grade level, offering classes for fourth and fifth graders that served about 40 students total. WCS partnered with the Friday Institute to utilize their expertise in STEM and computer science.

“The experience working with Friday Institute was very informative and supportive,” said Kimberly Scott, chief academic officer/federal programs at WCS. “The team members shared ideas and were eager to provide us with assistance to ensure that our students were able to be exposed to the computer science content.”

Sanei and Babb, a systems analyst in the Friday Institute’s Technology Infrastructure Lab, were the elementary level instructors for these robotics lessons, developed through curriculum from the VexCode platform, a block-based coding environment. Former Friday Institute Director of Technology Programs Jennifer Houchins trained them on the platform and Levi Diala, associate director at the Shodor Education Foundation, taught the middle school students. This program was not only an opportunity for students and teachers to learn but also a growth opportunity for these Friday Institute staff members. Sanei had previously taught math and statistics but not robotics, and Babb had a background in computer science but had never taught before.

“Throughout my schooling career, I’ve also really enjoyed helping my classmates with work and tutoring them,” said Babb. “I found it was one of the best ways to not only help others but help myself too, inasmuch as I’d better understand the material if I could teach it. My experience has instilled in me the desire to teach—I’ve wanted to for as long as I can remember!”

Warren County is located in the northeastern Piedmont region of North Carolina, along the northern border of the state. Although only an hour away from Raleigh, Warren County is conversely known as a rural area. Warren County educators believe having the exposure to innovative educational experiences was very valuable for these students.

“Our district is primarily rural, which is a stark contrast to our up-and-coming neighboring districts such as Vance, Franklin and Wake counties,” said Stephanie Seward, an academically/intellectually gifted teacher specialist at WCS and one of the teachers who supervised the robotics class. “Many students do not have opportunities to experience life outside of Warren County. Watching Mr. Mike and Mr. Hamid interact with the students gave me a sense of satisfaction that the students were able to have access to an opportunity that could change their outlook on technology and inspire them to continue to be lifelong learners in technology.”

When students quickly absorbed the material faster than planned, the instructors expanded the curriculum to include coding, geometry and logic, using project-based learning so students could create products while learning during the same session. For example, in one of the first lessons they planned to teach, they wanted the students to draw a shape around a castle. But to expand the lesson, they had students create several geometry-based variations, such as square, pentagon, hexagon and circle-like figures.

The thank you card Babb created for the students after the program ended, which is an example of the code learned in the robotics class.

The robotics program provided an array of benefits for students by developing skills that will prepare them for the future workforce and help them become responsible global citizens, including collaborative learning, exposure to critical computational thinking skills and problem-solving skills.

Robotics also allowed students to develop their scientific reasoning and apply their new knowledge to solve larger problems. During their final project, students coded their robot to move in a virtual coral reef to collect as much trash as possible during a limited time. Some students connected this lesson to real-world projects that use real and practical robots to collect trash from oceans. They began thinking about socioscientific issues around them and the ways robotic knowledge could help resolve them.

Not only were the students inspired by the program, but so were the teachers.

By the end of the program, the Friday Institute instructors felt like part of the WCS community, developing strong relationships with the students while also growing as teachers and researchers.

“As this was a summer-camp styled program, I really wanted to focus on fun as well—talking with the children, getting to know them, connecting with them—being a friend and a teacher,” said Babb. “I think Hamid and I accomplished this both really quite well; nearly every class was a joy. Seeing the progression of a student go from being totally disinterested in our class to, at the end, being excited about programming, was profoundly rewarding. I believe we made a lifelong impact on some of the children. I’m honored to be able to call our classes, students and teachers alike our friends.”