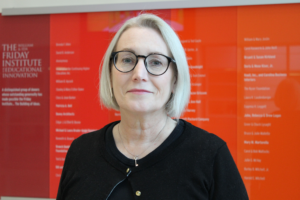 How does the media depiction of teacher strikes impact public perception of these issues – and ultimately drive change within the public school system? It’s a question that Jamie Gillespie, Ph.D., Friday Institute research associate, addressed as part of her presentation “Framing Strikes,” which she presented at the 52nd annual conference of the Northeastern Educational Research Association (NERA) on October 13.

The conference, held virtually this year, brings together faculty and researchers from across the country to learn about the issues facing the education industry. The conference theme was “Using Data to Solve Education’s Challenges” and focused on how researchers and the school community can use quantitative and qualitative data to improve teaching and learning, inform instructional decisions and to drive student success and practical societal change.

Following a decades-long career in education, Gillespie completed her Ph.D. in educational research and policy analysis at NC State in 2021. In “Framing Strikes,” Jamie utilized research from her dissertation to explore the relationship between media coverage and the outcomes of teacher strikes by comparing the media representations of teachers, teachers’ unions and school management in the context of two teacher strikes – Chicago (2012) and Seattle (2015).

“Throughout my career, I noticed that media coverage of education rarely included the perspectives of teachers and administrators and was often driven by politicians and reformers,” says Gillespie. “I found that this practice limited public discourse about education to those issues that most interested people running for office and those who had specific agendas regarding public schools – ideas that would not necessarily help teachers and school leaders,” she continued.

“The media framing of the issues and individuals in the two strikes likely played a role in the outcomes of the two strikes, along with the greater local and national contexts,” Gillespie notes. “It’s important for teachers’ unions and district leaders to pay attention to issue framing and agenda setting, and to influence media depictions, in order to persuade community members of their views,” she added.

Given the small body of research in this area, and the roles media and social media play in our lives, Gillespie says that there is a great need for more research – particularly in how teachers and unions are portrayed during normal conditions. She also notes that future studies could include a focus on social media portrayals of teachers and unions, and the analysis of the role of media in political and social divisions/polarization.