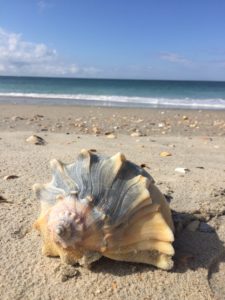 A couple of months ago, several friends told me that anyone who lives in Raleigh should go to the Outer Banks! Together with two neighboring families, we spent a week in a 4-bedroom seaside villa called “Lazy Whale West” at the end of August!

This seaside villa is located on Emerald Isle, which is right on the lower end of Outer Banks. A close friend highly recommended the villa, claiming this place had brought her the most memorable beach experience ever! The pier of the villa is a good spot to watch the sunrise, witness the sunset, and catch the blue crabs!

On the first day, we bought some chicken legs as bait. After carefully placing the chicken legs in the traps, we put them into the water and waited patiently for the crab to climb into the boxes. The key to capturing more crabs is to check the traps every 30 minutes! Sure enough, 30 minutes to a child feels like two hours to an adult. No wonder that the children kept checking the cages every five minutes! 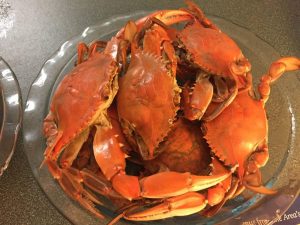 The beauty of the sunrise, sunset and moonrise seen from the deck of the pier was beyond description! Watching the sun rising from the sea bit by bit or setting like a red egg gradually disappearing in the sea took my breath away! Afterwards, when the sea turned completely dark, for the first time ever, I found the Big Dipper in the sky!

The next morning, we took a ferry to Shackleford Banks. When picking up shells of a great variety, the kids were fascinated by the conchs, whelks, olive shells and many more. They kept picking them up and putting them in bags until their bags couldn’t contain any more!

The following day, we went to Bear Island of Hammocks Beach. It is said to be a nesting beach for sea turtles. Between mid-May and late August, female loggerheads come ashore at night to nest above the high-tide line. Some lucky visitors can also see the dolphins playing in the Oceanside of the island. Unfortunately, when we arrived there, we didn’t see any dolphins. A lady at the concession stand explained that it was because dolphins do not like big waves. However, we did have a good time watching the shells digging into the sand when the waves flowed. 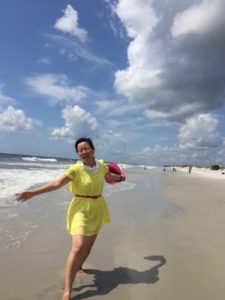 Originally, we had planned to do parasailing and scuba diving. Unfortunately, the water sports center closed due to the weather condition. In addition, scuba diving here is not the same as I had experienced in Thailand. The scuba diving is so professional here, as opposed to the experience in Thailand that the coach will assist you when you want to rise to the surface or go deeper.

To be frank, Americans are quite good at water sports. They brought their own boats, their own kayaks to the beach and many of them even brought their own beach umbrellas and chairs. Being accustomed to renting the umbrella at the beach, we didn’t expect that there was no renting service. Back in China we can rent almost all the essentials. The Atlantic Ocean was right in front of us! At one moment, I even joked that if we could sail across the Atlantic, we might end up visiting Europe!

On the last day, we adopted a highly efficient work mode informed by the law of division of labor and specialization. All the ladies were busy preparing for dinner while the gentlemen were responsible for fishing and crabbing. The most fun part is that the kids played on their own without pestering us with their pleas to play outside. They enjoyed playing a game named “No adults allowed!”

It’s truly an unforgettable experience for us. If possible, we want to revisit the Emerald Isle again to greet the dolphins, catch the blue crabs, and appreciate the gorgeous sunrise, sunset, and dazzling stars. 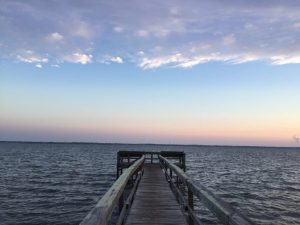