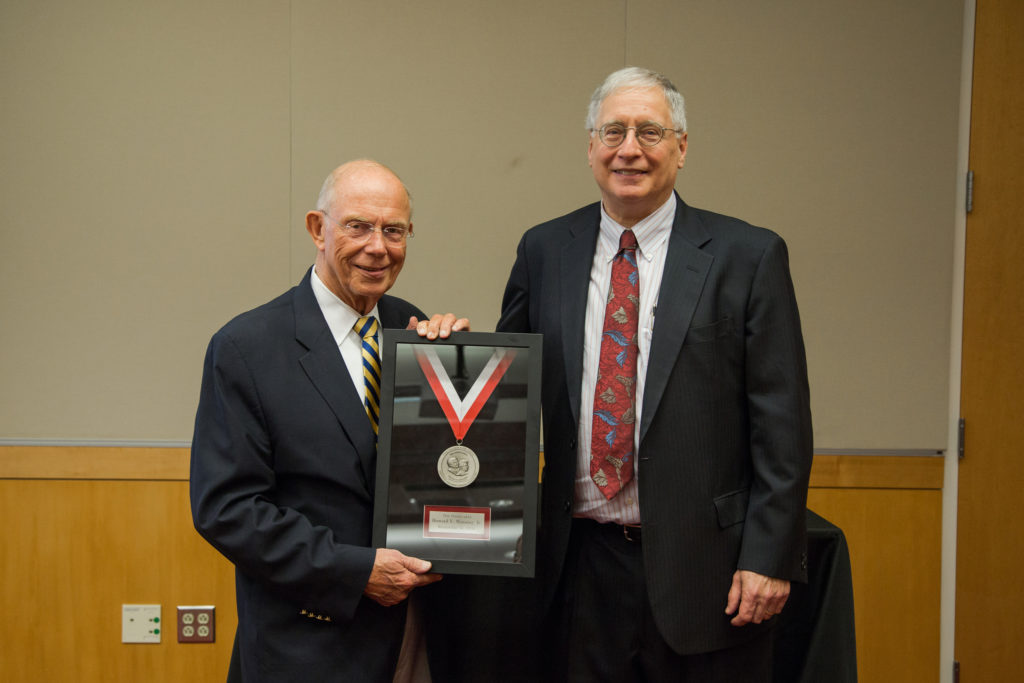 Burley Mitchell, former Chief Justice of the North Carolina Supreme Court, who wrote the original Leandro decision and appointed Judge Manning to the case, accepted the Friday Medal on behalf of Judge Manning.

“We are honored to have Judge Howard Manning join our esteemed group of recipients of the Friday Medal,” said Dr. Glenn Kleiman, Executive Director of the Friday Institute. “He carried out the NC Supreme Court decision in the Leandro case, made under Chief Justice Burley Mitchell, that every student in North Carolina has a constitutional right to a sound basic education.  Judge Manning defined what that meant in actual practice – a great principal in every school; a great teacher in every classroom; and adequate resources for them to support every child’s learning.  He then dedicated many years of his life working tirelessly to make sure that the State of North Carolina and its schools met their constitutional obligations.”

Judge Manning was unable to attend the Friday Medal ceremony but recorded a video for the event in which he shared the history of the Leandro case and how he approached ensuring that all North Carolina’s students have the opportunity for a sound basic education.

Play the video below to watch Judge Manning share the history and some of his experiences relating to the case (Click here if you do not see the video):

Dr. Hiller Spires, Alumni Distinguished Graduate Professor and Senior Research Fellow, moderated a panel of four North Carolina leaders who each played a central role in the history of the Leandro case. The panelists extended the history lesson provided by Judge Manning as they praised him for his courage, brilliance, and tenacity on behalf of North Carolina’s students.

Play the video of the panel (Click here if you do not see the video):

Burley Mitchell, former Chief Justice of the North Carolina Supreme Court, who wrote the original Leandro decision and appointed Judge Manning to the case, explained the relationship of Leandro to the Brown v. Board of Education, in which the United States Supreme Court declared state laws establishing separate public schools for black and white students to be unconstitutional.

“I knew that just as night follows day, our decision in Leandro was going to be resisted,” said Chief Justice Mitchell. “The children of this state, and their parents, will never fully appreciate how much they owe Howard Manning.  He has given his heart and soul and a large part of his life to this undertaking, and we could not have had a better steward.”

Dr. Bill Harrison, who was one of the original plaintiffs as superintendent of the Hoke County schools when the case was filed and, years later, a defendant as Chair of the State Board of Education, talked about how Judge Manning would make surprise visits to schools to make sure they were meeting their obligations, describing him as “a judge who had great courage…. He is well up there on my list of heroes.”

Gerry Hancock, who has long been involved in the case as the attorney for the Low Wealth Districts Consortium, added, “I’ve known a lot of brilliant judges. I’ve known few if any of Judge Manning’s quality…. He kept his eye on the children that most needed the help of the state.”

Senator Howard Lee, who worked with Judge Manning as Chair of the State Board of Education and Executive Director of Governor Perdue’s Education Cabinet, added: “The two people I want to give credit to are Burley Mitchell, for taking the first step that no one else would have had the courage to take, and Howard Manning, for being so dedicated and working so hard to move the ball forward. These two gentlemen will be ones we should remember for moving our education system to the next level.”

In addition to honoring Judge Manning, the 2016 William and Ida Friday Graduate Student Fellows were also announced at the ceremony. Each recipient is an advanced graduate student at NC State University who is beginning his or her dissertation work; has a very strong record of both academic achievement and service to students and educators; and has been actively engaged in the work of the Friday Institute. The individuals selected are at the start of their careers and poised to make important contributions to education. This year’s recipients are: Emily Cayton, Katherine Chestnut, James Creager, and Casey Medlock-Paul.