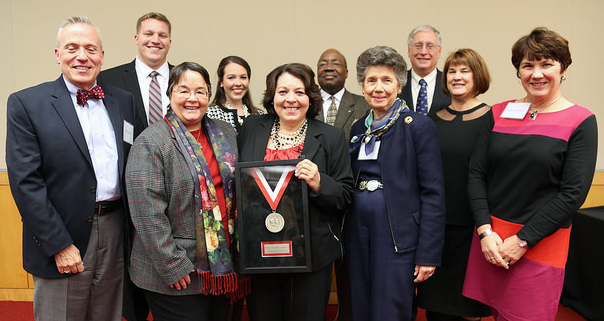 Summers is the principal of A.B. Combs Leadership Elementary School in Raleigh, NC and co-author of The Leader in Me, which is also the name of the paradigm Summers designed that was inspired by Dr. Stephen Covey’s The Seven Habits of Highly Effective People. The Leader in Me school model has reached schools throughout the world. To date, Summers’ innovative vision has been implemented in nearly 2,000 schools in 25 countries. 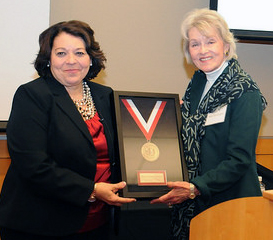 Mr. Friday had a great impact on this year’s honoree, as Summers had the opportunity to hear him speak when she was a student at the University of North Carolina in Chapel Hill.

“For 38 years, I will never forget the feeling that I felt when I listened to his words. He reminded us that it didn’t matter where we came from, it didn’t matter how much money we had in our pockets. What mattered the most was where we were going,” said Summers. “He reminded us never to take for granted the gift we had been given, the gift of a great education… His wish for us was to search and to hopefully find that which would be our life’s calling. I took his words to heart, and I found my voice by majoring in education.”

Summers was appointed as the principal of A.B. Combs in 1999. At that time, the school was performing poorly and was at risk of losing its magnet school status. “We are often our most creative and innovative when our back is against the wall,” said Summers.

Summers knew she had to make some major changes for the school, and was inspired by Covey’s seven habits. She attended a talk and spoke with Covey in Washington, D.C. “I have to believe that the events that happened that day in Washington, D.C. happened for a reason,” said Summers. “As I sat there listening to Dr. Covey speak… I thought, well if children could learn these habits, perhaps they wouldn’t feel so desperate and hopeless.”

After that encounter, Summers and her staff came up with a new mission for their school: “To develop leaders, one child at a time.” They integrated Covey’s seven habits into A.B. Combs’ curriculum, traditions, systems and culture, and added their own eighth habit: “Find your voice.”

In 2006, A.B. Combs was named the top magnet school in the country by Magnet Schools of America, then again – the first school to win twice – in 2014. Sean Covey, the son of Stephen Covey and a co-author of The Leader in Me, sent a video to congratulate Summers on receiving the Friday Medal. He described his first experience visiting A.B. Combs:

“There was a belief by the principal and every staff member in that school that every child was a genius, that every child had greatness in them, and they found ways of celebrating the unique gifts of every child,” said Covey. “It’s all about taking every single child and believing in them, and equipping them with 21st century skills, in addition to the core academic skills.” 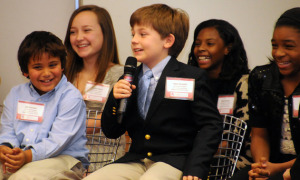 Past and present students at A.B. Combs spoke about their experiences with Summers and the 7 Habits.

“As a teacher-educator and as a parent at the school,” said Dr. Hiller Spires, professor and senior research fellow at the Friday Institute, “I’ve watched over the years as A.B. Combs has embraced the best educational practices, embodying them in how they support student learning and how they support teacher professional development. A.B. Combs’ mission to ‘develop global leaders, one child at a time,’ doesn’t just hang on the wall.”

After Summers’ presentation during the Friday Medal ceremony, she invited all of the students in attendance to come to the front of the room to answer questions about their experience at A.B Combs and how the habits have helped them. They described how they have used the habits in conflicts with siblings, ensuring that they get their homework done, and using players’ different strengths in sports to make their team better.

Summers then asked them to give one word to describe outstanding leadership. Their answers included discipline, friendly, loyalty, courage, passion, sharing, and kindness, but one answer stood out among the rest: “I would say, it’d be you.”

View the photo gallery from this event here.
Contact the FI Communications Office