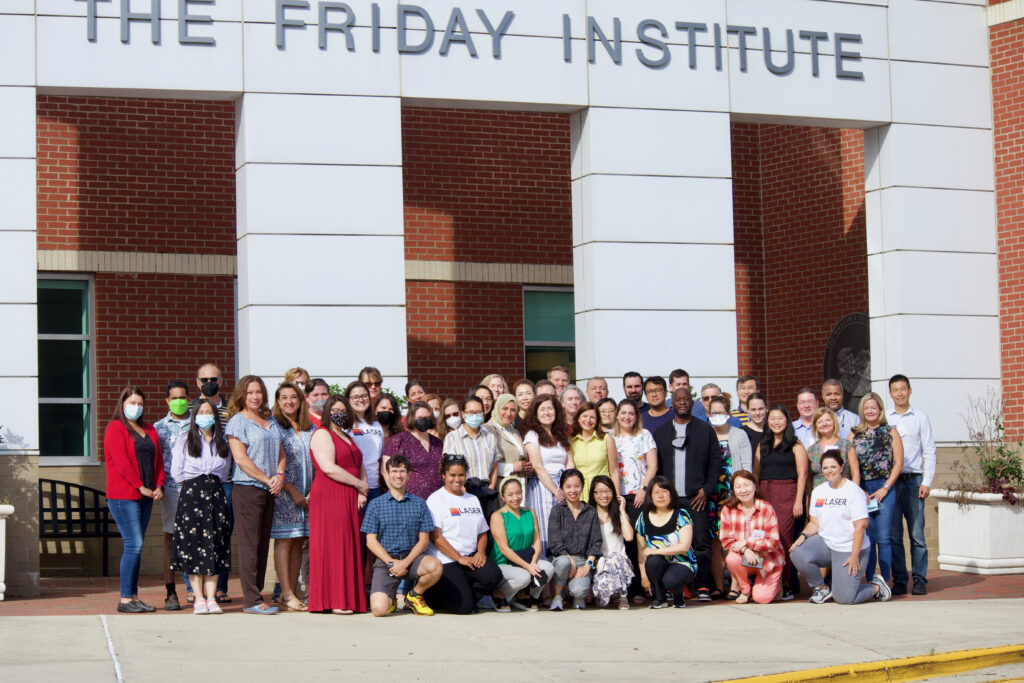 Shark lovers across the country are celebrating Discovery’s Shark Week this week, but scholars from the Learning Analytics in STEM Education Research (LASER) Institute celebrated their own shark week July 11-15 during the LASER Institute’s first in-person weeklong summer workshop at the Friday Institute for Educational Innovation. In honor of the LASER Institute’s line graph logo, which bears an intentional resemblance to a shark fin, scholars spent time during the workshop coming up with their SHARK goals, the LASER Institute’s version of SMART goals, for their yearlong program. Scholars identified a Specific professional development goal and How they would achieve it, ensured it was Attainable and Relevant, and made a plan for Keeping it on track. 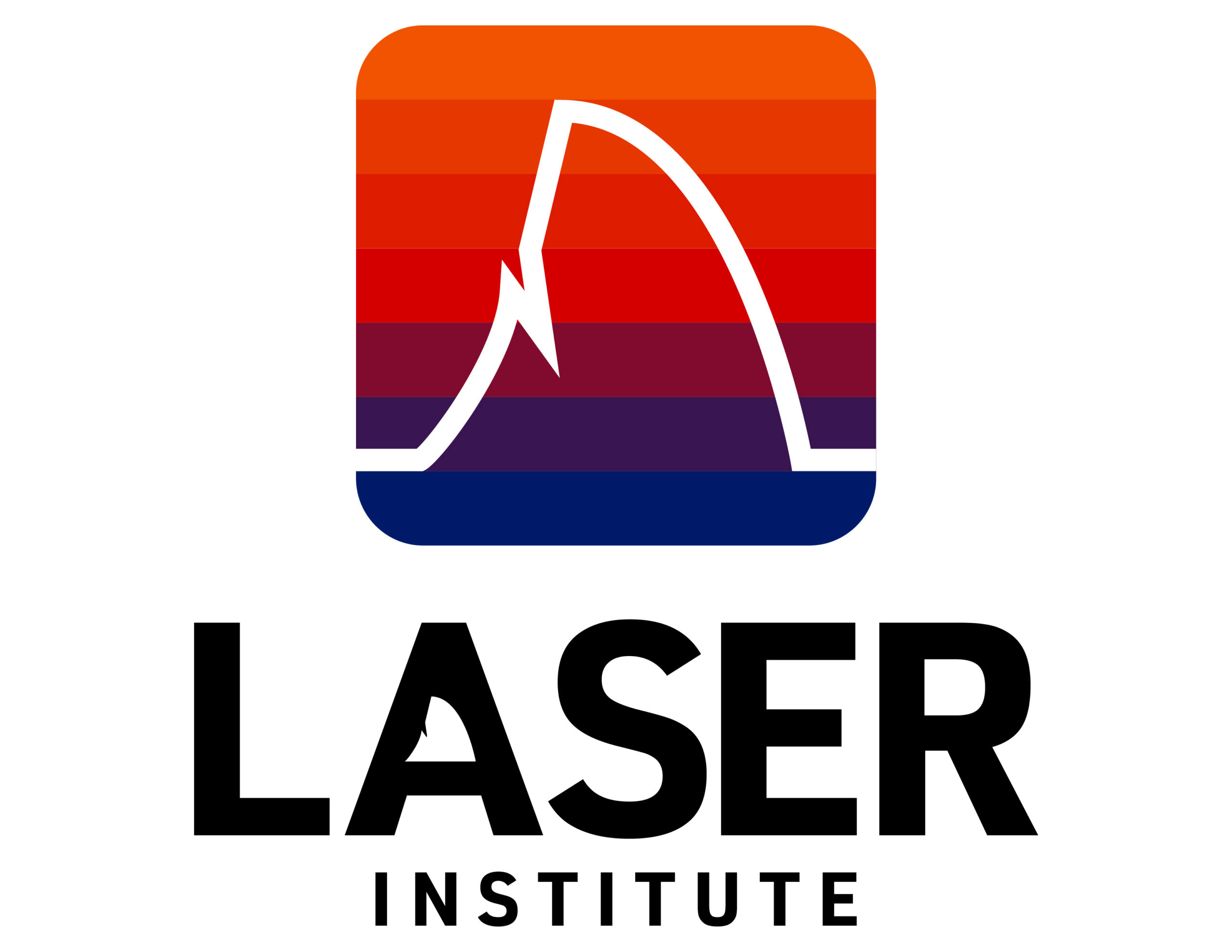 “As fans of Austin Powers, we couldn’t resist a subtle nod to Dr. Evil’s infamous demand for ‘sharks with laser beams attached to their heads’ when coming up with the logo for the LASER Institute” said Rob Moore, assistant professor of educational technology at the University of Florida College of Education and co-principal investigator for the LASER Institute. “One of the expectations for the LASER scholars is to complete a self-directed learning project over the year. SMART goals are a common approach to organizing projects and scoping out work, and in keeping with our overall theme, we naturally created SHARK goals.”

This year was the first time the LASER Institute, a professional development program for early and mid-career researchers founded by the Friday Institute, held its summer workshop in person, when about 50 scholars participated in differentiated learning labs, listened to internationally recognized experts in the field, learned about instructional resources and participated in community building activities designed to support scholars in their professional development this summer and throughout the year.

“I think the in-person experience for me has been really valuable,” said Justina Rodriguez Jackson, a research scientist from the Georgia Institute of Technology. “I think many people have experienced lots of virtual interaction and conferences over the last couple years, so I think coming to a location, being together, being in the same room, feeling the energy from everyone else, all the other scholars, has been really important for me.”

Funded by the National Science Foundation (NSF), the LASER Institute is a professional development program for early and mid-career researchers founded by the Friday Institute and developed and implemented in collaboration with education faculty and Ph.D. students from NC State University, the University of Florida and The University of Tennessee, Knoxville. The goal of the institute is to help researchers understand and improve STEM learning through a learning analytics lens.

LASER scholars spent a significant portion of the week participating in learning labs, which provided scholars applied experience in advanced analytical method such as network analysis, machine learning and text mining, as well as reinforced foundational skills necessary to leverage these methods. As a means of demonstrating their newly acquired skills, scholars also had the opportunity to earn “badges” in their self-selected focus areas. 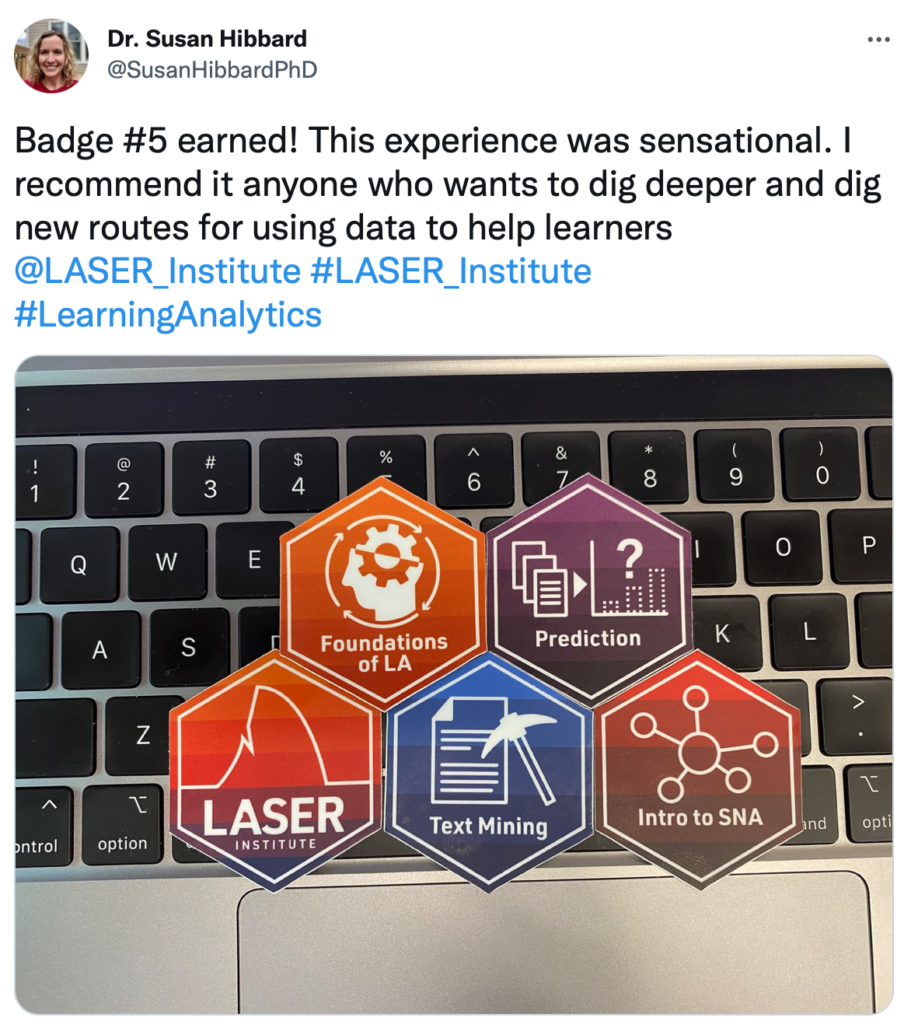 A few of the badges scholars could earn during the summer workshop. Scholars coveted these stickers, sticking them everywhere, from their laptops and water bottles to personal planners and luggage.

“The thing I most enjoyed about hosting the Summer Workshop is seeing the moments when scholars went from learning new skills to immediately applying them to their own work,” said Jennifer Houchins, director of technology programs at the Friday Institute and senior personnel for the LASER Institute. “Many scholars brought their own data to the Summer Workshop and were able to begin applying the methodologies we were teaching in their work before they departed.”

I think coming to a location, being together, being in the same room, feeling the energy from everyone else, all the other scholars, has been really important for me.

The ability to seek help on-site was valuable for scholars who might not have worked with data in this way before or had not worked with large amounts of data in a while.

“Having that immediate support from the instructors, I was able to find how do I fix the issues when I work with my own data, and they have a wonderful, structured curriculum so I can go back and review the materials,” said Jung Mi Scoulas, an assistant professor at the University of Illinois Chicago. “I don’t expect that I can accomplish everything within a week. I think the benefit of this institute is to continue learning, commit and then have a cohort so now if I have an issue, I can contact someone else from this LASER cohort.”

Each day scholars also heard from guest speakers representing a wide range of expertise in the field of learning analytics. Each speaker contributed to the Handbook of Learning Analytics – Second Edition, including keynote speaker George Siemens, who co-leads the Center for Change and Complexity in Learning (C3L) at the University of South Australia and is a professor of psychology at University of Texas Arlington.

“Our focus on authors and researchers who contributed to the recently updated Handbook of Learning Analytics was very timely and addressed important topics not addressed by our learning labs,” said Shaun Kellogg, interim executive director of the Friday Institute and principal investigator for the LASER Institute. “This provided scholars an opportunity to not only hear from, but also to engage with, researchers experienced in the use of learning analytics to support student collaboration, inform teachers and students of learning processes and progress, and ensure equitable and ethical applications of student data.”

In addition to the educational opportunities the workshop provided, the community building connections were a top priority for LASER Institute staff and scholars. 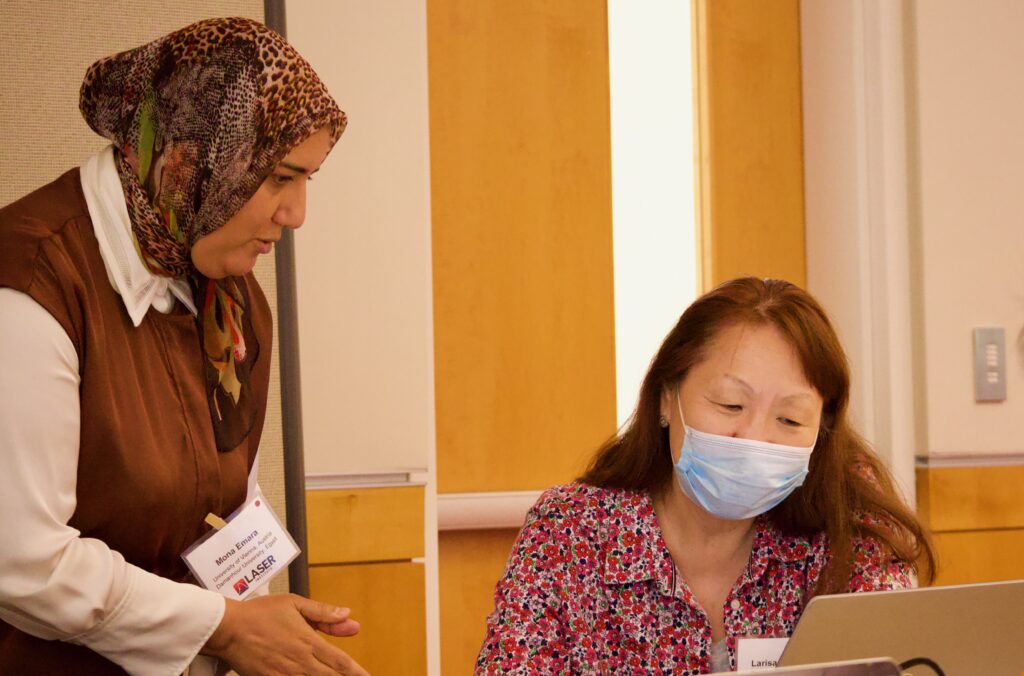 The Summer Workshop was the beginning of future relationships and collaborations. A core component of the LASER Institute will be an online community of practice to provide follow-up support to the Summer Workshop and continued professional learning, mentoring, and networking opportunities throughout the year.

“It’s just been really great to network and to hear about other education researchers,” said Liz Frechette, a senior research and policy associate at the University of Oklahoma. “So often you’re sort of siloed in your own department and you don’t get to hear about other education researchers unless you go to a conference and end up in some sort of presentation there. Here, it’s really great to hear about all the things that people are doing, getting more ideas and just really building those relationships with others.”

Some scholars have decided to continue to meet regularly throughout the year, in addition to their LASER Institute events, for coding workshops and peer-to-peer sharing meetings.

Others felt an even deeper sense of belonging in their cohort, due to the inclusive nature of the recruitment process. In support of the broader goals of the NSF’s Building Capacity in STEM Education Research (BCSER) program, the LASER Institute prioritized scholars from underrepresented groups and faculty at minority-serving institutions.

“So often when you’re interacting with sort of the data science/learning sciences world at large, is that it can feel, as a woman, very male dominated, and here, I was so excited that there were so many women,” said Ashley Vaughn, associate director for the Center for Integrative Natural Science and Mathematics at Northern Kentucky University. “It was really great to see so many women participating and being able to have that community where you didn’t come in feeling like the only woman in the room.”

After experiencing the LASER Institute’s program goals around building disciplinary knowledge, technical skills and social capital during the summer workshop, these scholars were hooked on the LASER program.

“The absolute human capital knowledge that has been brought to bear here is incredible—from the subject matter experts that are teaching us R coding and the R environment to data mining and text mining, machine learning and applications and social network analysis,” said Jennifer Clark, a senior lecturer at the University of Florida. “It’s just an incredible time that we’re living in in digital transformation and making sense of all this data is just a great opportunity to come together with other colleagues to build and forge those network relationships.”