Even jade is shattered,

Even gold is crushed,

One does not live forever on this earth:

We endure only for an instant!

A cemetery keeps thousands of souls and countless memories. To me, a cemetery is a place for people to pay respect to their lost loved ones. People might visit their lost loves’ gravestones once or twice a year, bringing food, flowers, or paper money, and sweeping the tombstones. Therefore, I had never thought a cemetery could be a place full of histories and dozens of interesting stories. 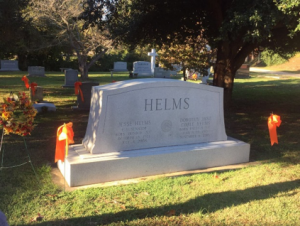 The other day, we went to visit the Oakwood cemetery, which is located in downtown Raleigh. It has almost 150 years of history, intertwined with the city’s history. Many people who have made a great effort for the city during their life time are honored to sleep under this place of the beautiful city they loved. The very first figure I met is Jesse Helms, who was also a controversial senator from North Carolina. Senior US Senator Mitch McConnell from Kentucky attended Helms’s funeral, and said: “No matter who you were, he always had a thoughtful word and a gentle smile.” People who worked with Mr. Helms had spoken highly of him, but his political proposals attracted a lot of complaints from citizens. For instance, he had once called gays “disgusting people,” and even advocated against gays and lesbians for seeking supports. His behavior incurs public resentment. However, years later, Helms knew his granddaughter was a lesbian, and then he changed his mind and advocated to support same-sex marriage. Moreover, due to his politics, now people still nurse a grievance on him. 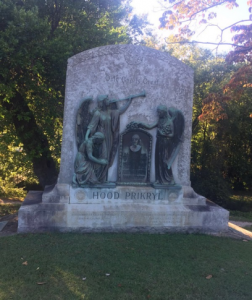 After visiting Jesse Helms and learning about his stories, I met a very beautiful monument. At the first glance of the tombstone, I thought it should be a couple’s grave. It turned out that this monument belongs to Ouida Estelle Emery Hood, a local woman married to Wallace C. Hood. This couple met their loyal friend Franklin Prikryl. Ouida was a generous and kind-hearted female. During the time they spent in Michigan, Ouida’s neighbors appraised her as “always doing something for somebody.” Nevertheless, Wallace abandoned her without a word. After she passed away, her friend Franklin brought her body back to Raleigh and built a great monument for her. Franklin had chosen to put “Only God Is Great” and both of their names on the monument, and put some Michigan earth on her tomb. Since Franklin also carved his name on the stone, people believed he should stay here as well. Now, people could see “HOOD PRIKRYL” on the stone, but there is only Ouida with an empty side. The untold story cannot be known forever. 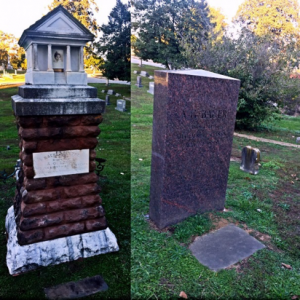 There is a great story that blows my mind. Adolphus Gustavus Bauer, who was an architect in Raleigh, was falling in love with a Cherokee Indian lady whose name is Rachel Blythe. It was in the 19th century when cross-racial marriage was not allowed in North Carolina. Subsequently, they had to move to other states to get married. This young couple was full of courage and love. However, the story is not as glorious as we thought. Rachel passed away at the age of 26 in 1897. Then Bauer designed a tombstone for her. Soon after, Bauer suicided after completed his last work. Love has its magic power, as Lao Tzu once said: “Because of great love, one is courageous.” Race issues still exist in today’s society. Back to the 19th century, the race problems were worse than that of today, but the young couple did not give up. Although they could not be married in Raleigh while they were alive, they could hold each other’s hand while they rest in the city.

At this moment, I have to mention another story which I like best. There are two lions lie at the cemetery of Hester and Long, a gay couple who met each other in the year of 1976. They are still alive, but they already built the monument. I was at first confused by these two male lions. After knowing this story, I felt that their design is ingenious! As Loretta said: “Love isn’t something you find. Love is something that finds you.” 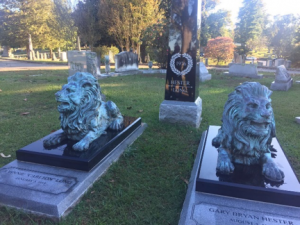